There is no surprise that any type of craft has huge therapeutic benefits. These range from enhancing fine motor skills, the opportunity to be social with those of a similar interest & the elation of completing a given task, however simple or involved.

I have a friend who has had a rough time dealing with a brain tumour.
She had "Trevor The Tumour" removed & then began her long road to recovery.

After a while, my friend asked for some kits to be made for her, as she is spending a lot of time simply sitting. She needed something to do with her hands, that could be a challenge to her, but not so much that she couldnt achieve the end product. The other part of her brief was that the card could be used for her to give to those who helped her during her recovery.

What a beautiful gesture, hey?

Enter: Stampin' Up! products!! I muddled over this conundrum for a while, before I came up with a card design that she could use and that I felt reflected her.

This is my card design: 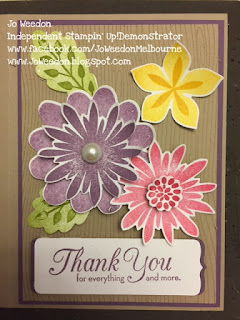 This card has 13 elements to it, between the 3 base layers, the flowers, embellishment and the sentiment. This was no mean feat for a woman who has been through a lot in the last few months!

But at least she can take her time and choose to send off her cards as she makes them, one by one. 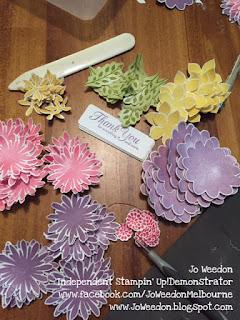 I wrapped all the separate peices and wrote an essay, just in case she was having a bad day or her short-term memory was playing games on her 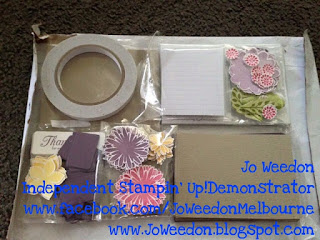 Not long after I sent her parcel to her, she posted this photo. She is busy getting into her cards, when she has the time, energy and discipline :)) 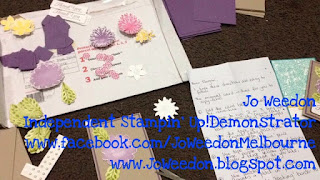 Sharing my therapy with others, makes me feel all warm 'n fuzzy, Im happy to give her a helping hand, considering we live away from each other.

Kids In The Kitchen...errr, the Stamp Room!!

Every now and then, one of my 3 children will want to come in and actually make something in my stamp room. Rachelle, 14 decided she wanted to make a small gift for her teachers, after seeing an item from On-Stage 2015. 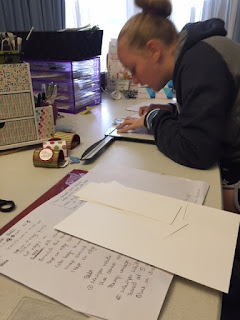 So Rachelle made 13 of these beauties, stage by stage and then happily handed them out on one of the last days of Year 8. 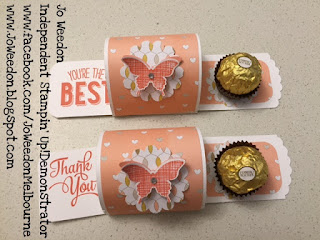 As the receiver pulls the tab on the right, the left peice pulls out also.

Of course, they were very well received!! Well done Rachelle, I loved having you in my stamp room, let's not wait until next Christmas before another visit, pleeease????

Spending time with children AND stamping is absolutely a win win for me!!
Posted by Jo at Monday, January 25, 2016 No comments:

Coming up to Christmas, I was asked to make quite a few Card In a Box(es), so it was refreshing to be asked to make something different. I have a friend who had made Ornaments with her children's class & teacher's name in them & needed a special box for them.

When Melissa asked for a red box & a green box, I wasnt so surprised... Then the last box was going to be Mustard... Mustard?, I asked, thats an unusual colour to request, isnt it?
It turns out that they are the favourite colours of the 3 teachers. So off to create I went!!

I began by measuring the ornaments and then making a standard box for them. Due to the dimensions, I needed to make 2 halves, as the A4 cardstock wasnt wide enough. Once I was sure the dimensions were correct, by using Rule #101: Measure twice, cut once, I began to assemble my boxes. 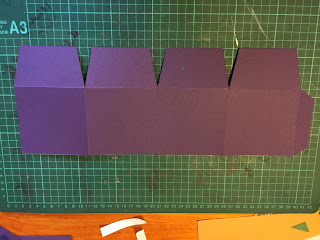 I then worked out if I could have a window in the box, to display the ornament - it was gorgeous and Melissa had worked hard for it to work... 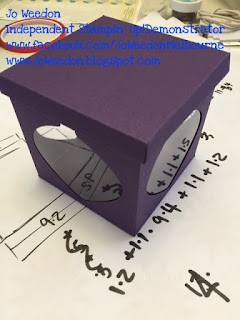 (Gotta love my scrawl on the bottom of the page, dont ya? LOL!!)

So once I was happy with the box and the lid, that needed to slightly larger than the box, I began to grin like a Cheshire Cat!

In the end, they came together really well.

The final colours were Old Olive, Elegant Eggplant and More Mustard, (retired) and I think they all complimented each other, even though they werent for the same person. And the Glimmer Paper just gives it the Christmas feel!!

When I was done, I knew I wanted to show off the ornament as the lid was removed. So I constructed a little tab that held the ribbon of the ornament. This is how it worked :)) 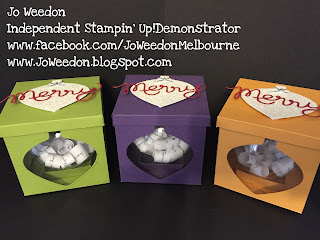 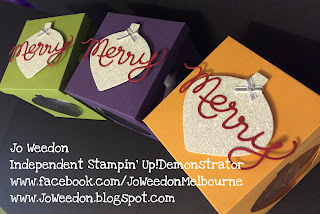 As you can see, the papers with the children's names can be seen through the windows. I love how what Melissa made & my contribution made this work so well!!

Until next time, stay safe and keep crafting!
Posted by Jo at Wednesday, January 20, 2016 No comments:

Now you may think that I am beating a dead-horse by posting more photos of On-Stage 2015, but these 3D items are stunning!! From one 3D maker to all of you out there, I would hope that you get just as excited as me :)) 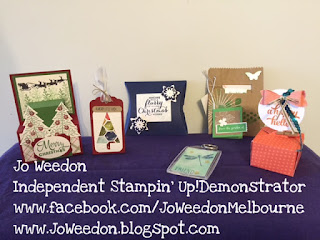 As promised a looooong time ago, I was going to share some of the swaps I received from On-Stage, 2015. (Clearly I dont get much time at the computer, I am hoping to change that this year!!)

So, finally, here are some examples of the amazing work I swapped my ear-rings with...
Anyone that wants to take the time to make swaps & swap with me, is fantastic!!
It doesnt matter if they have been a demo for 4 weeks, 7 years like me, or longer - all cards and 3D items have something to offer that will inspire you to get in your craft room!!

Please note that I swapped with many demos, I apologise if your swap is not here, I am simply show-casing a few of what I have received... 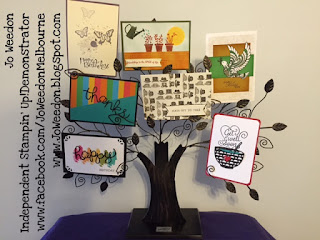 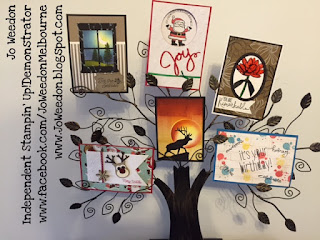 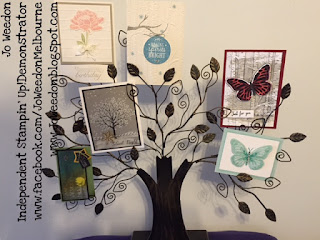 My next post will have some of the 3D items I collected along the way...so be prepared for more gorgeous work!!
Thanks for stopping by :))
Posted by Jo at Tuesday, January 12, 2016 No comments: 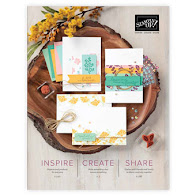 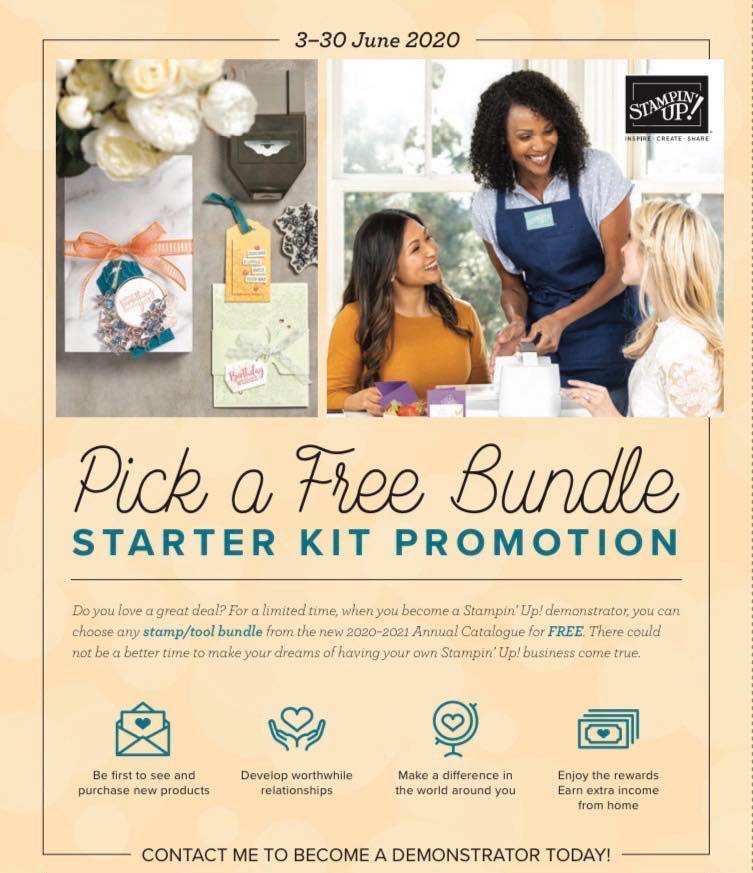